Beacon graduate Raymond VanGeest was today's chapel speaker. Highlights about his experiences getting "Outta Town" at discipleship school will be coming soon, but here are some photos from chapel and a link to his blog: http://raymondvg.wordpress.com/

Be sure to watch Raymond's video entitled "Outtatown Souvenirs and Memories," which can be found on his blog. 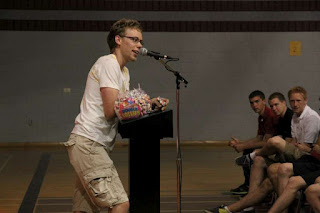 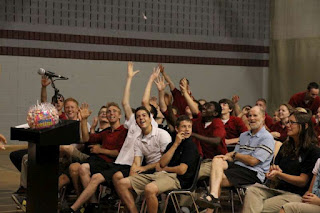 Click here for a video from the student praise team leading worship with "Days of Elijah."
Posted by Smithville Christian High School at 21:41 No comments:

Here are some photos from a culminating project in Mr. Bender's Grade 12 leadership class. The students planned and hosted a week-long survivor challenge. It was "awesome!" 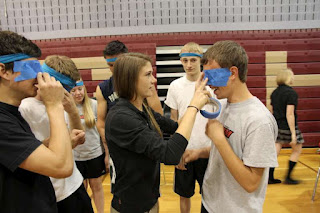 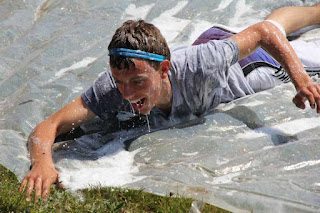 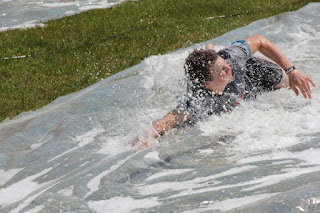 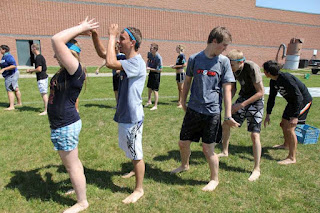 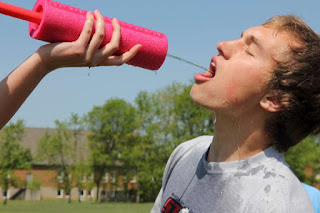 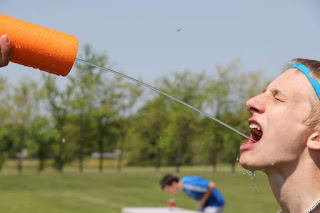 Congratulations to the members of the Smithville Christian Praise Team for a gold medal performance at the National Music Festival in Ottawa on May 16! Congratulations also to Brandon V. for receiving an honour award for musicianship and leadership. Well done and well deserved on both counts! There were many favourable reviews, not only of the performance but also of the "Live Out Loud" shirts the students wore. Many people asked where this team was from, so I had the opportunity to explain to them where the very important municipality of Smithville is located and how they could find out more about our school.

The adjudicators were very impressed with both the excellence of the students' performance and the message they communicated through it. Well done! 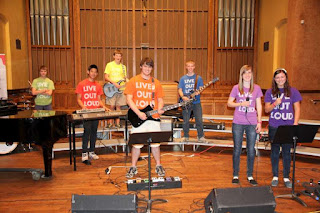 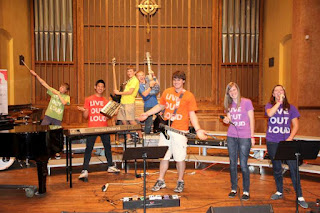 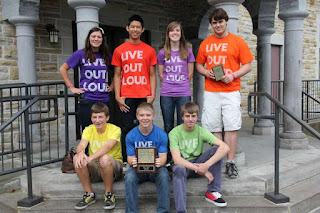 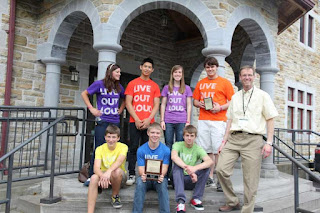 Posted by Smithville Christian High School at 11:24 No comments:

Who's on your team?


Jill and Matt are heading to OFSSAA this week! 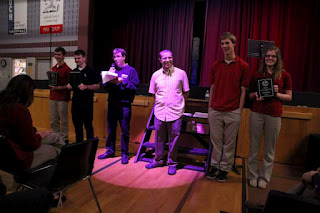 We also celebrated some recent track and field accomplishments, including Joe Z.’s first place jump at the OCSSAA meet on Tuesday at York University.

Being part of a team means you are part of something bigger than yourself, said Mrs. Slump-Houwer, who delivered today’s chapel talk.
“A key part of track and field is working towards your ‘personal best’ or PB,” said Slump-Houwer. “It’s all about pushing yourself harder and pressing onward to make individual improvements in time, distance or height.”
1 Corinthians 9: 24, 25, Paul says “Do you not know that in a race all the runners run, but only one gets the prize? Run in such a way as to get the prize. Everyone who competes in the games goes into strict training. They do it to get a crown that will not last, but we do it to get a crown that will last forever.”
Slump-Houwer described the training and accomplishments of her son, Adrian Houwer, who played varsity football for Wilfrid Laurier University for five seasons. “The team members had strict training and high protein, high carb diets,” she said. They practiced six days a week in rain, sleet, wind or snow. But in his final year with the team, the Laurier Golden Hawks won varsity football’s top Canadian honour: the Vanier Cup. “It took many years of commitment and self-discipline, but they did win the prize,” she said. 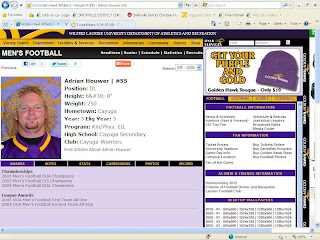 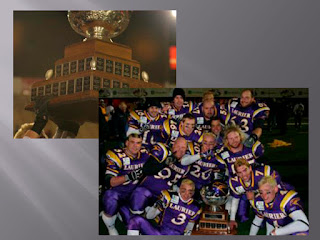 Another one of her sons, Leonard, was an accomplished hockey player, and a member of the Welland Triple A Tigers who won an OMHA championship, in addition to coming home “with many trophies and medals over the years.”
Her youngest son, Sean, plays basketball on a team where the coach encourages co-operation and teamwork, rewarding the athletes with chocolate bars on days when every member of the team is successfully set up to score a basket. Even the fans get in on the excitement, knowing that the final member of the line-up is going for “the chocolate bar basket,” she said. 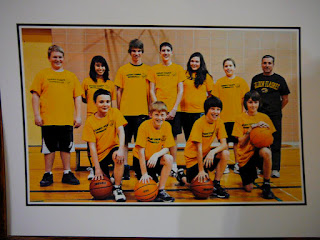 All of her six sons are athletes and all of their athletic successes “have been very exciting,” she said. There are many good memories of victory and there are shelves in their house full of trophies and medals.


But Adrian’s diamond-encrusted Vanier Cup ring hurts his fingers and his Play-of-the-Game Rolex watch is uncomfortable to wear, she said, and many of Len’s trophies are stored in boxes.  Her boys have learned that there are many ways to define athletic success. 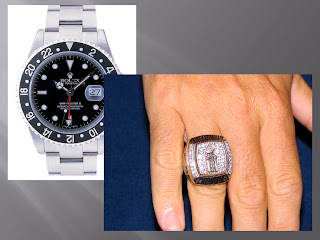 Sean’s coach says “it’s not about the chocolate bar or the medal, it’s about encouraging kids to work to their fullest potential, to support, uphold, trust and build confidence in each other as team members,” she said. Leonard and his wife, Jen, have raised thousands of dollars for cancer research as Jen battles Hodgkin’s Lymphoma. Adrian popped a surprise proposal to his fiancee at a workplace fundraiser. She shaved his curly locks, and the duo raised over $2,000 for cancer research in one afternoon. 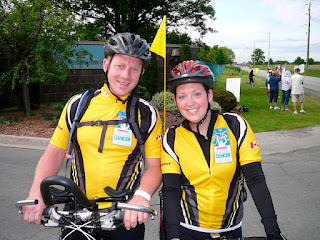 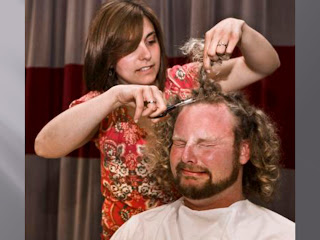 “These are all chocolate bar moments in life,” said Slump-Houwer.
Being part of a winning team is great, said Slump-Houwer, quoting Max Lucado. When your team wins,  “something very special happens. You don’t even have to be the best player on the team. In fact, you can be the very worst player on the team and it still happens as much for you as for the team star. When your team wins, you are a winner too. You share in the credit for the good work of someone else, simply by being on the team.”
That’s the way it is with Jesus, said Slump-Houwer. “What your sports team does for you on game day, your Lord does for you every day. Because of his performance, you cross the finish line of each day with a perfect score.” You are given the prize, not because of what you do, but because of who you know. Being part of a team of Father, Son and Holy Spirit is being part of an unbeatable team, she said. “A better team doesn’t exist.”
Slump-Houwer started the chapel by asking every student who had ever played on a sports team to rise. The entire school got to its feet. She ended the chapel by asking students to rise again. 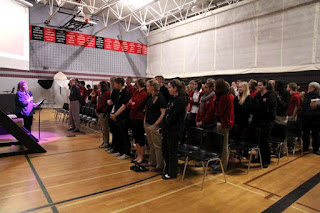 “You are God’s team,” she told them.
“He made you. He created each one of you with a variety of gifts and talents: athletic, spiritual, intellectual, artistic, musical, social and many more. Encourage one another to strive for your personal best, to achieve your fullest potential. Go beyond the gold and obtain the crown of eternal life. God can work mightily in you.”
Here are students having a chocolate bar moment at the end of chapel -- thanks to Mrs. S-H! 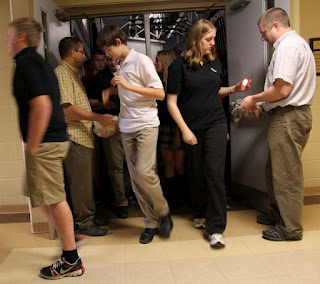 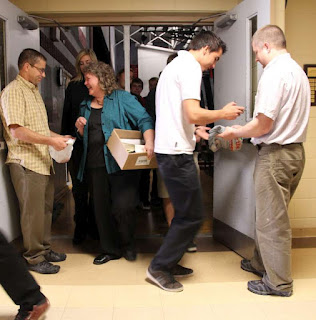 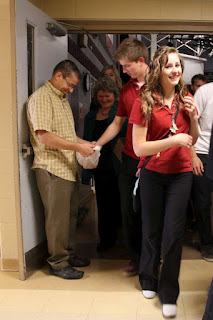 Posted by Smithville Christian High School at 22:06 No comments: