Teenagers who attend Christian schools shouldn’t think they are hiding from the world in a “holy huddle,” said principal Ted Harris at Tuesday morning’s chapel. Mr. Harris said teachers from Smithville Christian High School joined their colleagues from across the province last week at a two-day professional development conference, at which they were challenged to make their teaching relevant by “engaging culture.”

That means instead of thinking that we are retreating from the world, we must be equipped to be part of it, he said. “How do we train our young people to create culture, to cultivate culture,” said Mr. Harris, “to make things around us better.”

That’s why Smithville Christian was pleased to host West Lincoln Mayor Doug Joyner at chapel this week, to speak about the role that local government plays in our daily lives – from the clean water that comes out of our taps to the roads that we drive on.

Mayor Joyner described the two tiers of municipal government in Niagara, and acknowledged that the 17 cents out of every property tax dollar goes to public schools. “So your parents are paying taxes that go to the public schools and the Catholic schools, they don’t go here,” he said.

“I applaud you, all of you for getting involved to move this (healthy communities initiative) forward, because you are getting involved,” said. “You are making a difference. What you are doing in the community is very good, so keep it coming.” 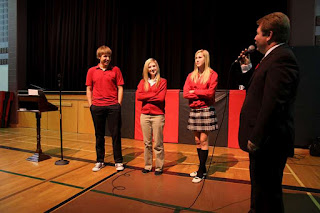 Mayor Joyner quizzes students on their knowledge of local government. 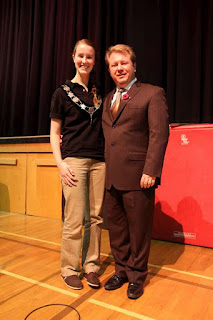 Tallia, the student council president, with Mayor Joyner and his chain of office.
Posted by Smithville Christian High School at 14:34