Today's chapel was a warm-up for next week's Spiritual Emphasis Week, with a student praise team leading an extended time of worship, including two new songs: "Breathe," by Michael W. Smith and "Lead Me to the Cross," by Hillsong. 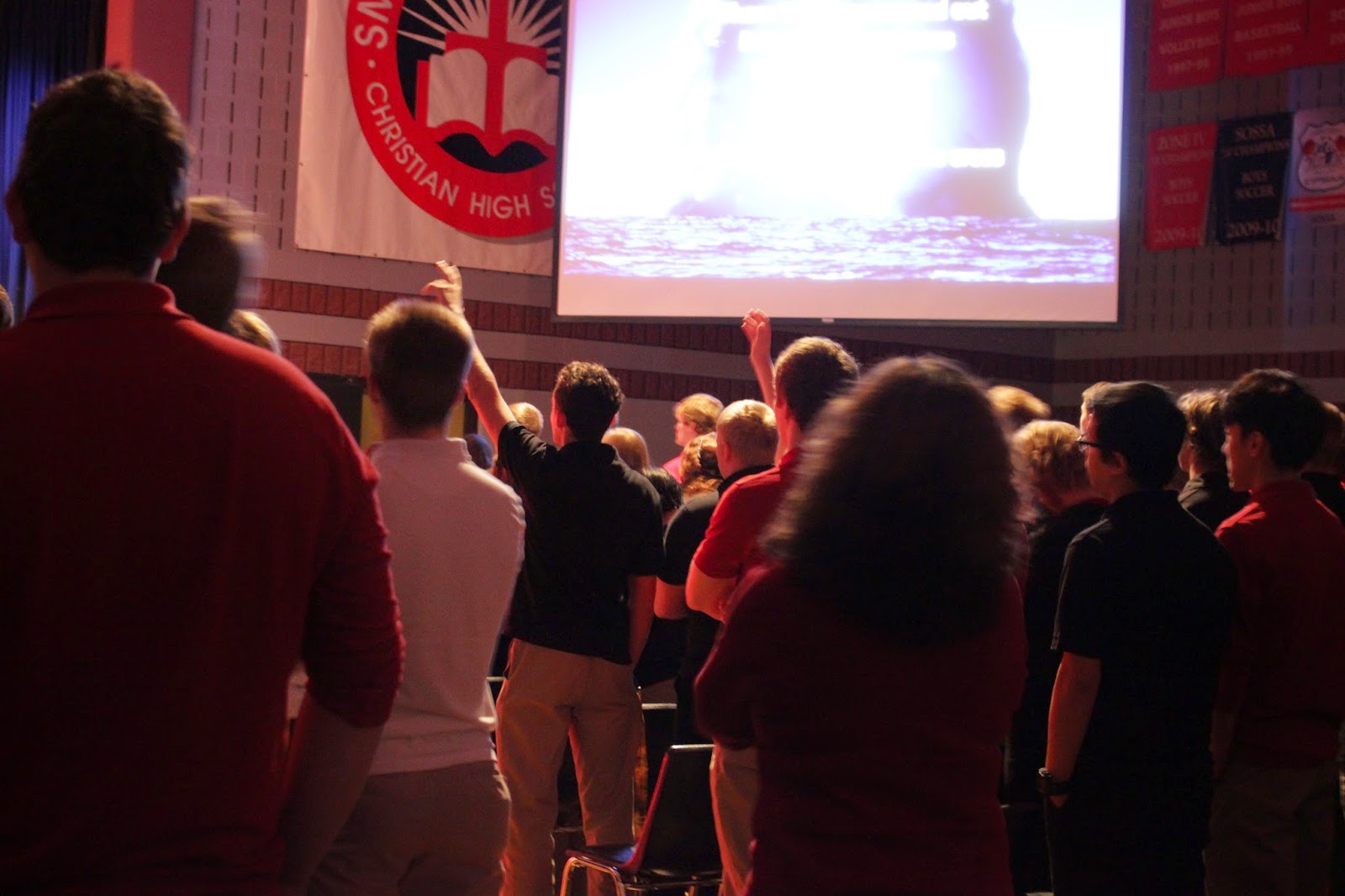 They also read a poem called "Entering the Story" which was written by Spiritual Life Director Gord Park for October's Edifide Teachers' Convention.

is born this day, in the city of David, a Savior, who is Christ the Lord
Promise Made, Story Unfolds
Matthew
Mark
Luke
John
Peter
Paul
The list goes on
Luther
Calvin
Hus
Knox
Wycliffe
Irving
Wesley
Talks
Revival
Reform
Salvation
Saved
Booth
Finney
Kuhlman
Sunday
Men and women
Through the years
Following Christ
His Spirit here
Now it's me
Now it's you
And this we know
Will never get old.
Promise made. Story unfolds.

Park read Isaiah 40, which proclaims the greatness of God. Next week's spiritual emphasis week theme is "How Great is Our God!" and will feature chapel every day plus a time for small-group discussions after lunch. We will also be heading down to Grimsby for Guys Night Out on Wednesday and Girls Night Out on Thursday. Parents, alumni, friends and guests are always welcome to join us for daily chapel, which starts at 9 a.m.

Whether you are able to come or not, pray that we will let the Holy Spirit work in all of our hearts.

Chapel also featured an opportunity to pray a blessing over the members of our Senior Boys Volleyball Team, who are heading to OFSAA this week as the defending champions. 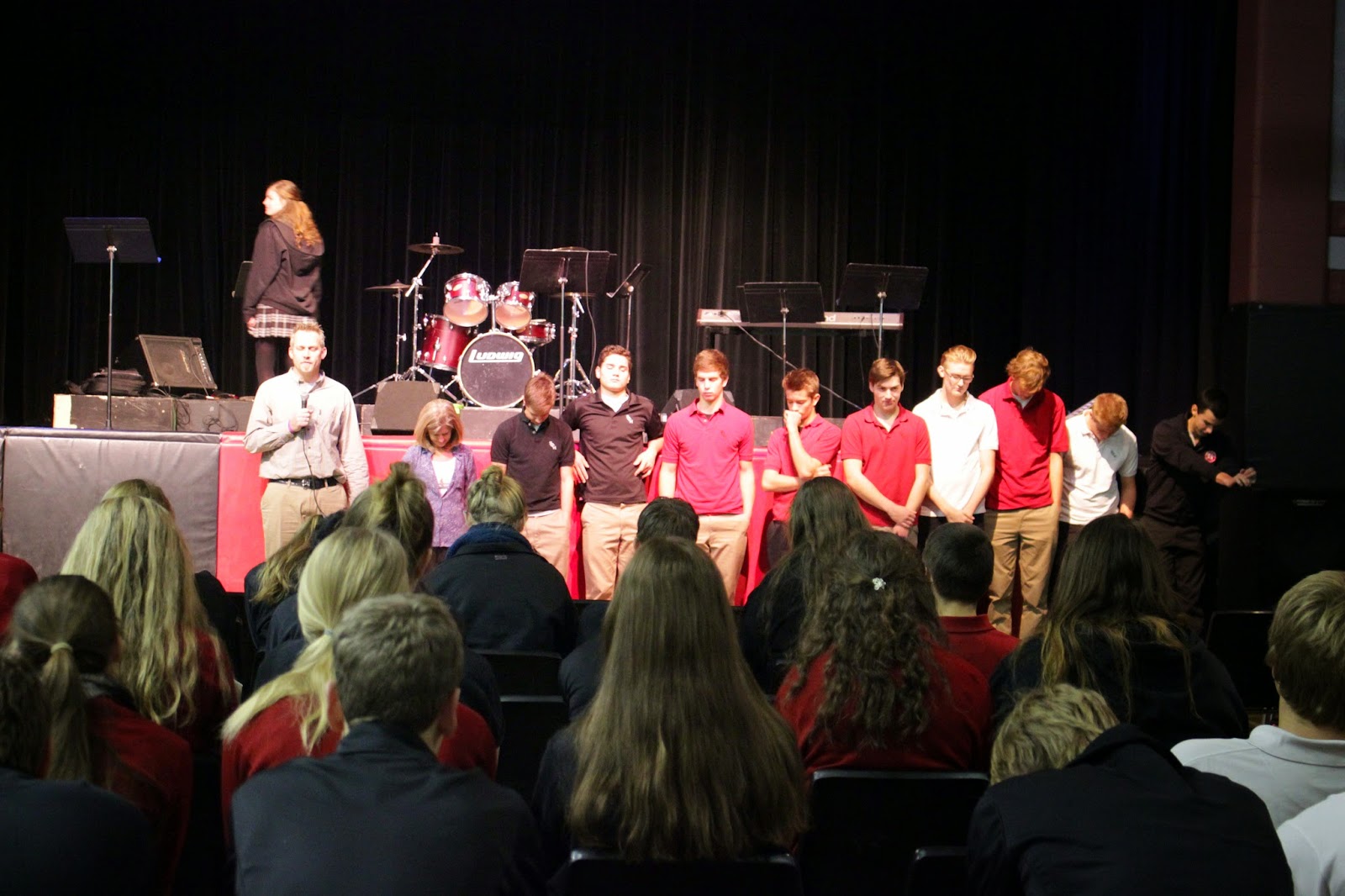 221 —  inches combined height of the Senior Boys Volleyball team 2014.  Height helps!
33 — hours of intense practice
116 —sets played
85  — sets won, 31 losses
2,811 —points earned
30,000  — estimated total of passes, digs and lasers practiced and executed during games
4 — first place finishes/gold medals including zone (and hopefully a 5th this weekend)
0  — number of games lost at OCSSAA.  Incredible!
3 — number of passionate coaches who have invested in the STORM over the past 4 years. Which so happens to also be the # of years that Mitchell regrets not playing high school volleyball)
1 — the ranking going into this OFSAA tournament that no other team in Smithville's history has ever earned
6 — the number of letters in the answer to the questions "What all day?"  BOMBAY!!

The OFSAA tournament schedule this week is four games for pool play: three on Thursday and one on Friday.

Then, hopefully, it's on to the quarterfinals at 6:30 p.m. on Friday at Niagara Sport and Social.
Tournament passes are $20 for adults, $12 for students. Day passes are $10 for adults and $5 for students.
It would be great to have lots of fans: parents, students, alumni and friends.