The presence of the Spirit

Check back soon for an update on today's chapel.
Posted by Smithville Christian High School at 22:58 No comments:

You are God's hands 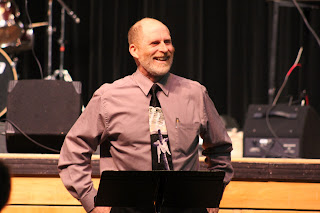 He also told a joke about a man perched on a roof, praying to be rescued from a flood. A neighbour paddled up in a canoe, but the man declined the offer of help, saying he had prayed and was counting on the Lord to save him. Another rescuer came by in a motor boat, but the man declined. As the flood waters rose, a helicopter came but again the man declined, saying the Lord would save him. Unfortunately, the man drowned. When he got to heaven, he asked God why he hadn’t saved him. God replied: “What do you mean? I sent a canoe, a motorboat and a helicopter! What more did you want?”


“Sometimes we are so busy looking for God to do the miraculous that we forget to observe God at work in the ordinary,” said Robb.
The same is true for serving, he said. It’s not just about going on mission trips to faraway places or being a preacher.
“God most often calls us to serve him in the ordinary tasks of life,” Robb said, citing Proverbs 3: 27 and 28.
“Do not withhold good from those to whom it is due, when it is in your power to act.  Do not say to your neighbour,  ‘Come back tomorrow and I’ll give it to you’ — when you already have it with you.”
“Your hand is God’s hand,” Robb told the students. “Don’t withhold good. Never walk away from someone who deserves help.”
You could help a classmate who is struggling to understand, he said. You could offer to babysit for a neighbour who needs a break. You could do odd jobs for someone down the road who is sick and needs yard work done.
The passage also warns against procrastination, he said, and encourages us to see ourselves as God’s hands.
He used the example of a stranger who showed kindness to him when he was a young student on the way to seminary. The man offered a simple act of hospitality, but to a weary student it was the hand of God at work.
“God worked through him and his wife to encourage me,” he said.
Robb quoted C.S. Lewis: 'Do not waste your time bothering whether you ‘love’ your neighbor, act as if you did. As soon as we do this, we find one of the great secrets. When you are behaving as if you loved someone, you will presently come to love.'
“Don’t worry about your feelings,” said Robb. “Do good, and the feelings will follow. Be on the lookout to be God’s hands and feet.
“It’s amazing that God would entrust his work to you and me,” he said, “and a lot of times it’s just in the ordinary things.”

Watch a video from chapel: the praise team leading in worship with Every Move I Make.

Posted by Smithville Christian High School at 22:38 No comments:

The most awesome thing

Posted by Smithville Christian High School at 20:55 No comments: