Celebrating the dignity of others

Students at Smithville Christian High School were challenged to consider not only what they think but why they think it.

Christopher Mark D’Souza, an award-winning Toronto educator, songwriter and lecturer, told students they need to be able to think critically about their ideas about race, ethnicity, gender, marital status, sexual orientation or religion – and the many other ways in which people are different from each other. 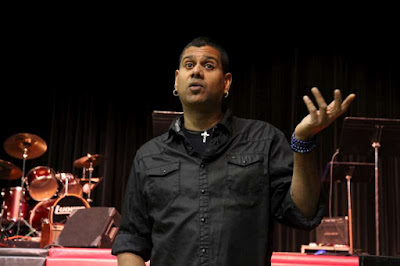 D’Souza showed a picture of an intricate snowflake and said that just as snowflakes are different from each other, so are people, and there are many aspects of our identity that we can’t change.

“I am brown,” D’Souza said, describing his family of origin. “I am a brown man and I can’t change that, so I may as well celebrate it.”

Similarly, “if someone makes fun of you because of your height or skin colour, or eyes or weight or sexual orientation or gender you can’t change that,” he said. When we are interacting with other people, “respect is not enough,” he said. “You need to honour their bodies and honour who they are, to empower the person you are with to feel better about themselves. We want to promote dignity.”

D’Souza described what it was like for him, a person of colour, growing up in the 1960s, and the hurtful things people said about him at school. He described the repeated acts of vandalism against his family’s cottage that so demoralized his father that the elder D’Souza made the decision to sell. 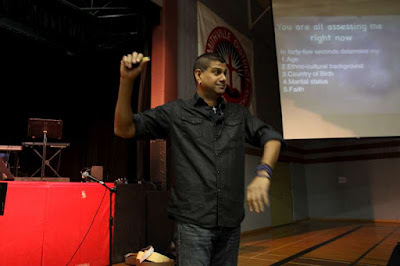 But then six neighbours came over and told him that they knew who was breaking the windows, and promised D’Souza’s father that the vandalism would end.

“They showed us dignity and they used their power,” D’Souza explained, inviting students to similarly use their power to uphold the dignity of others.

He said it’s important for us to ask if our conduct is replicating stereotypes or interrupting them.

The vandalism made D’Souza and his family think “the whole world was racist,” he said, “but it turns out it was just one family.” Just as the D’Souzas' neighbours challenged the vandals, when we hear people dismissing or degrading others, it’s up to us to say ‘not here.’

D’Souza shared some of the stories and songs he has written about diversity and inclusion, and invited students to consider that when they obey God by blessing others with generosity and acceptance, the world will be a better place. 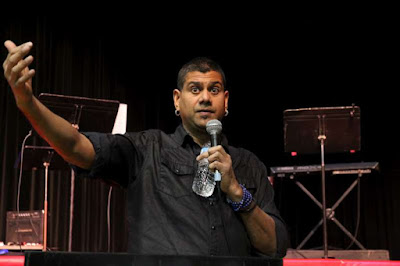 Jesus taught us to do unto others as we would have them do unto us, he said, and Jesus walked the talk.

“He reached out to the disadvantaged. He hung out with the outcasts, he challenged the hegemony,” D’Souza said.

Principal Ted Harris thanked D’Souza for “giving us lots to think about,” and closed the chapel in prayer, thanking God for opportunities to grow in our ability to respect others “as Jesus himself taught us.”

Student praise team, The Crew, also led in worship with “Holding Nothing Back,” “Heroes” and “My Redeemer Lives.” 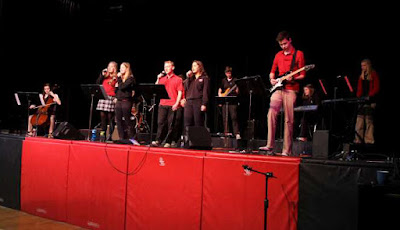 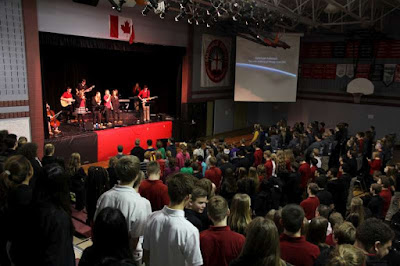 Members of The Crew also joined D’Souza in leading the school in singing two of D’Souza’s songs.
Posted by Smithville Christian High School at 21:46 No comments: Links to this post