There’s no point in working hard at school, doing your homework or even being nice to others, students at Smithville Christian High School were told on Monday morning, in the first chapel of Spiritual Emphasis Week. 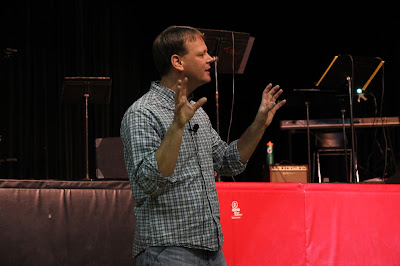 At least that’s true if you are inclined to agree with John Lennon, the former Beatle whose song, “Imagine,” longed for a world without heaven, hell or religion, said Paul Vandenbrink (Class of 1992) who is this year’s Spiritual Emphasis Week speaker.
Imagine there's no heaven
It's easy if you try


No hell below us
Above us only sky
Imagine all the people
Living for today...


Vandenbrink said the ideas expressed in Lennon’s lyrics were part of a cultural push “to get rid of religion,” to create a society where there is no afterlife, no God. 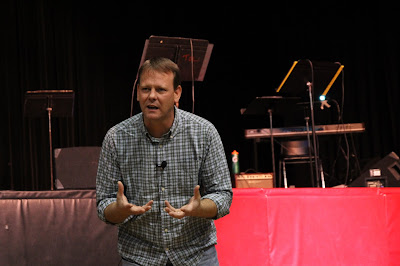 “Lots of people agree that the world would be awesome if we could get rid of God,” Vandenbrink said. “They think God is bad for humanity, that he’s a killjoy, he’s got rules, he’s angry and judgey.”
But according to the teacher who wrote the book of Ecclesiastes, a life lived completely on the horizontal plane, as if there is God, is meaningless, he said.
2“Meaningless! Meaningless!”
says the Teacher.
“Utterly meaningless!
Everything is meaningless.”
3 What do people gain from all their labors
at which they toil under the sun?
4 Generations come and generations go,
but the earth remains forever.
5 The sun rises and the sun sets,
and hurries back to where it rises.
6 The wind blows to the south
and turns to the north;
round and round it goes,
ever returning on its course.
7 All streams flow into the sea,
yet the sea is never full.
To the place the streams come from,
there they return again.
8 All things are wearisome,
more than one can say.”


“Without God, life sucks, then you die,” Vandenbrink said. “It’s like listening to an entire Adele album in one shot. It’s beautiful, but it’s such a downer.” 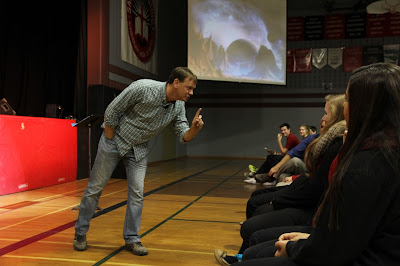 What do people gain from their labour? Vandenbrink asked, quoting Ecclesiastes 1:4. “Some of you are getting As in school. You work hard, you do your homework.” Others join sports teams or serve others.

But it’s all meaningless because nothing is new and nothing lasts, and within a few generations all of us will be forgotten, he said. Recycling is useless because the planet is doomed anyway, chasing after pleasure only reveals how insatiable humans are, and nothing we strive for will completely satisfy.
“But what if the story doesn’t end there?” he asked. “What if there is more?”

Many years after the teacher of Ecclesiastes wrote that all of life is meaningless, another teacher made it possible for us to know that what we do right now does count – “it counts forever.”

Vandenbrink said the chapel messages for the rest of the week will deal with the big questions of life. “I want to make you think, I will do my best to ask you thought-provoking questions.”

A student praise team led in worship with “Thrive,” “Brokenness Aside” and “Whom Shall I Fear?”


Chapel will be at 9 a.m. Tuesday to Thursday this week and at 9:30 on Friday. All are welcome. 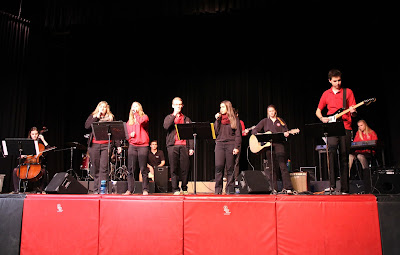 Posted by Smithville Christian High School at 19:51 No comments: Links to this post

What we say has the power to be poisonous or to speak life, students at Smithville Christian High School were told at chapel. 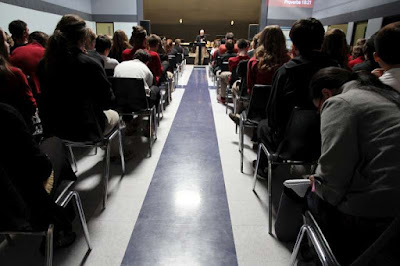 Students Brendan and Sean did a short skit about what you can say when a friend fails a test, and Robb also quoted singer/singwriter Toby Mac:

When the sun won't shine and you don't know why.
Look into the eyes of the brokenhearted;
Watch them come alive as soon as you speak hope,
You speak love, you speak...
You speak Life. 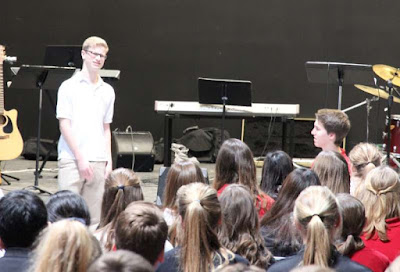 Robb identified some of the ways our words can be poisonous: slander (untruthful and mean things that are as destructive as murder), gossip (partially truthful, but sensationalized and hurtful) or careless (when we speak before thinking of the impact of our words).

Robb said, before you speak, ask:


“Careless words can cut deeper than a knife,” he said.

Robb also listed some of the ways our words can speak life: words that encourage, that give hope, that inspire, that support.

"Do not let any unwholesome talk come out of your mouths, but only what is helpful for building others up according to their needs," he said, quoting Ephesians 4:29.

“You have the power to build up, to encourage, to love and to care for people with what you say,” Robb said. “Let us be people who thrive by speaking life into others.”

Chapel was held for the first time in the newly renovated lounge, and the first praise team to take the new stage led in worship with “Cornerstone,” “Holy (Wedding Day)” and “Brother.” 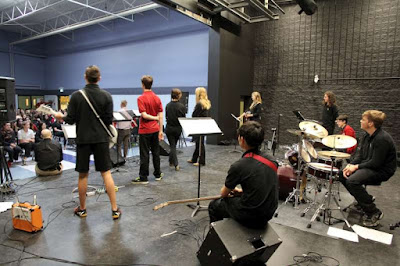 Posted by Smithville Christian High School at 21:00 No comments: Links to this post