This is how we know God is here

Students at Smithville Christian High School learned how a live art demonstration at the school’s recent fundraising gala is evidence of God’s hand at work in their lives – and in their school.

At this week’s chapel, spiritual life co-ordinator Gord Park told a remarkable story about Grade 12 student Mariah Ellis sharing a snippet of her life story at the March 3 bursary bash. 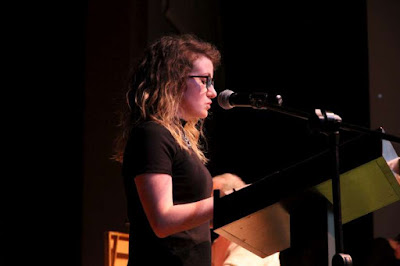 As Mariah told her story on stage at the gala, St. Catharines artist George Langbroek, who had read Mariah's script a few days in advance, was on stage with her, creating a painting inspired by her tale. 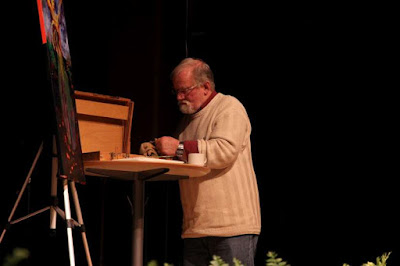 Mariah shared how she had been motivated to action by a chapel talk given in October 2016 by Grade 11 student Lau Mussa. Lau had recounted the story of a dream he had had about being stuck in a pit and calling out for help. In his dream, Lau heard a voice telling him to look up. When he did, he saw a hand reaching down to rescue him. Lau didn’t know what the dream meant, but a week later he met some Canadian visitors to the orphanage in Tanzania where he lived. After serving as a translator for the visitors, Lau was eventually invited, and sponsored, to come to Canada to attend Smithville Christian High School, where the visitors’ relatives – Gemma, Owen and Shasta Ricker – went to school. At the October chapel, Lau told the students the dream was prophetic, that being a student at Smithville Christian was the rescue he had dreamed about. 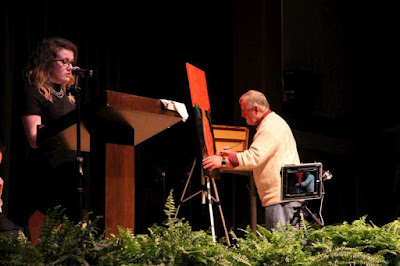 Fast-forward five months to Mariah, at the gala. Mariah told the dinner guests that after she met Lau and learned of the lack of food and education that Lau’s family was experiencing in Tanzania, she launched a series of fundraisers at Smithville Christian to raise money for his family. With the help of her mother, Mariah made and sold candy apples, brownies and apple crisp to fellow students at lunch – earning enough money through sales and donations to pay a year’s worth of school fees for Lau’s brothers at home.

Meanwhile, on stage with her, Langbroek was painting Mariah’s story. She spoke of bake sales and school fees, but she did not talk about Lau’s dream.

Yet, what was appearing on Langbroek’s canvas was an astonishing image of a person in a pit, being rescued by someone else reaching down, against the backdrop of a third figure with arms outstretched in crucifixion or joy.

Langbroek said afterwards he had no idea he was painting the scene from Lau’s dream. Langbroek said he had interpreted Mariah’s bake sale story as evidence of the power of Godly people and Godly community to help each other, but he had no idea that the metaphoric image he had chosen was exactly the same as Lau’s dream. For guests at the gala, this was a spine-tingling revelation. 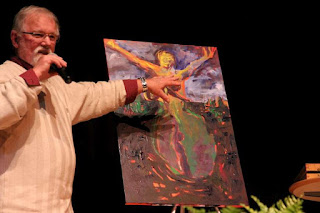 At this week’s chapel, Park told students that Langbroek’s painting tells each of their stories too.
“This is not just Lau’s dream,” Park said. “This is all of us.”

Each of us in the person in the pit, mired in our own sins and shortcomings and needing to be rescued by a Saviour. But each of us also has the ability to be Christ to others, to reach out a hand to help someone else – whether it’s selling brownies or leading in worship as part of a student praise team.

“And we are all part of the celebration,” Park said, referring to the third figure in the painting, “or this is God behind all of it. 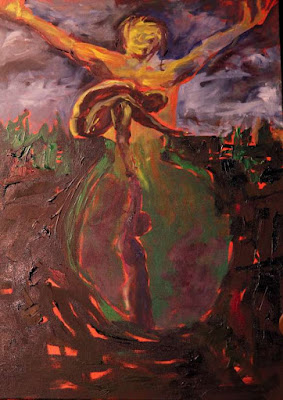 “God is good and God is here.”
Posted by Smithville Christian High School at 23:19 No comments: Links to this post