The final chapel of this semester featured a fantastic time of worship with the Praise Team leading us in singing "I am Not Ashamed," "Holding Nothing Back," and "My Redeemer Lives." 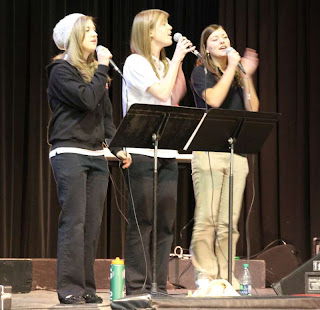 The Student Council Executive then presented a mini drama:

Veronica: "Once upon a time, there was a school full of kind and cheerful students. All of the students love to play hockey."

Morgan: "Every lunch hour the boys would split up into teams and play a friendly game of intramurals, with the girls faithfully cheering them on from the sidelines. That was just the way the system worked."

Veronica: "Then one day, a brave girl said, 'Hey! We can do anything they can do! Why sit here on the sidelines when we could be star players?!' And all the other girls agreed."

Morgan: "They picked up their hockey sticks and revolted. And with a hop in their steps and a click of their pens, they put their names on the sign-up sheet."

Veronica: "At first the boys said, 'Girls? No way! They can't play hockey.' "

Morgan: "And you know what the girls said? 'Yes! We can!' And every single one of those girls went on to win the championship, and later, the Stanley Cup."

Veronica: "And so, ladies, the moral of the story is you can't follow the system." 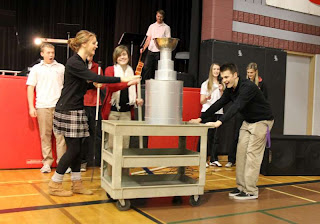 Then the lights were dimmed and we sat back and relaxed, enjoying a music video concert prepared by Mr. Neale Robb, featuring:

Mr. Harris presented the new policy on Personal Electronic Devices at school, including our school's desire to avoid:
- students locked into their own little worlds
- activities that compromise who we are
- having non-educational uses creep into classroom learning time
- emphasis on who has the coolest stuff.
The major issue is one of respect, said Mr. Harris.

Mr. Harris also presented the new Research and Development schedule which will start on Fridays in Semester 2. Classes will start at 9:30 a.m. Choir will rehearse from 8:40 to 9:40 a.m. Class periods will be 70 minutes long, and there will be a 28-minute lunch period. School will end at the same time: 3:02 p.m.

God bless all of our students!
Posted by Smithville Christian High School at 12:22